Palelyloitering was once a website gathering all things Pros-fic related in one place (you can still find it on the Wayback Machine). This is the LiveJournal incarnation (and will eventually be mirrored on Dreamwidth as a back-up). Click on the links below to hopefully find what you're looking for - although it will take a while to get all the pages up and running again, so apologies and thank you for your patience.


Brief Summary
Doyle overhears a conversation about Bodie that will change their lives forever.

This author's stories are not available online, and I was told that she has expressed a wish that they remain as paper-only stories. At least some of her stories are available in the ProsLib dvd archive, with the author's permission.

Another Turn of the Rack

Babes in the Woods

Bird in a Gilded Cage

The Cop From Snowy River

Dog in the Manger

The Green Cock of the Yellow God

Kill on Command (Three's Not a Crowd series: 2)

The Luck of the Draw

Murder on the Moor

Out of the Jungle

Point of No Return

There has to be a Morning After

Up Jumped a Swagman 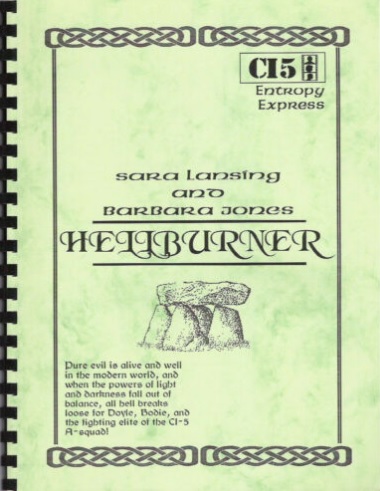 Description on an Ebay sale
This is a novelette by Sara Lansing and Barbara Jones.
From the flyer: Amongst the softly-raining leaves of an English autumn Bodie and Doyle can at last relax, after the hardest summer of their lives. Now they can put behind them the horrors of the drug war of high summer, of their unplanned sojourn to the African bush, and get back to straight forward work: or as straight forward as CI-5 ever gets. But nothing can prepare them for that which hides behind the innocent face of English country life. A subculture exists, and as with all things, it has two faces. One face smiles, and dedicates its existence to light and life: the other is turned to darkness, and worships only hate. At a point-to-point race meeting in the Downs country, a chance meeting with corrupt businessman Harry Walters sets 3/7 and 4/5 on the trail of something strange, and a labyrinth of hidden intent, closed minds and incredulity leads them to the shocking face of murder, torture, of a corruption that makes Harry Walters’ escapades look mundane. Something powerful is stirring in Britain, turning in its sleep, drifting up to consciousness, and CI-5 is alert to it. The trail leads to London, out to the picturesque shores of Wales, and in the towns around Cardigan Bay Doyle, Bodie, Murphy and Fischer link up with a long-running investigation by the Serious Crimes Squad of the Welsh Police into the activities of the shadowy John Stanhope, known to his followers as The Master. What goes on behind the closed doors of his secure, hidden world? What is his obsession with darkness? How much truth, or reality, can there be in this nonsense? And how far can the dark side go before the light breaks through and blinds it? Doyle and Bodie, at the eye of a building storm, find themselves guests in a strange world, guided by some old friends Doyle had not thought to see again so soon. But when the hellfire begins to fly and the skies become as blood, sharp-edged steel and the confidence of firepower are all the surety they have — or need — to beard the dragon in its cave!

Robyn LaSalle wrote two novels that are loosely Pros novels, in that they include Raimon Autumnwolf (Martin Shaw) and Beauxde' Ravenswood (Lewis Collins) among various other intended characters/actors, but are really original novels. Together they form The Galactic Exploration Society novels.

Turn of a Friendly Card

Contents
129 pages.
The Agent With Style website lists this under "Original Fiction" but claims that the author, includes characters inspired by t.v. shows like The Professionals - we are invited to see who we can recognise. And personally, I reckon that's supposed to be Doyle, there on the cover...

A space adventure. In the foreword, Robyn states this is a story of undying love, following her first zine from this series, Turn of a Friendly Card. The characters Beauxde' Ravenswood and Raimon Autumnwolf - Bodie & Doyle, by any other name - make another appearance as the leads for this zine. It's a strong h/c story with Raimon searching the stars for his lover, Beauxde', who's missing presumed dead. A collection of other characters move through the story as Raimon refuses to give up his search. (Information from an external source!)

Doyle is acting Alpha while Cowley and Bodie are in Geneva - they return to political intrigue and personal disaster.

See also Kathy Keegan.
List of Mel Keegan stories
o0o
2019-10-21 - The information below was posted to the original palelyloitering website. As I note, I'm going to carry on amalgamating the information from

taverymate and my own information, including links. The first lists are the start of that amalgamation, the material under that is from

I have been sent a wonderful amount of information about Jane/Kathy Keegan today, including what may be a complete Pros story list for them both. I am going to include that list, as sent, here below my normal listing, to be gradually amalgamated, so that it can be used by people in the meantime! As I add stories to the fic list, I will take them off the copied list below, and italicise them in the fic list until a proper link is made for them. With many thanks to

taverymate, and to her sources of information!

Clan of the White Fox

Flesh and Steel Omnibus by Jane (1994, Nut Hatch Collective; oop): gathers together all three novels (Flesh and Steel, Blood and Fire, and Soul and Storm)

A Game for Two Players

Magickal by Jane (circa 1990, Nut Hatch Collective; oop): gathers together Parts 1 to 6 first published in issues of Cross My Heart and Fantazine

Power and Magick by Jane (1993/94, Nut Hatch Collective; oop): gathers Parts 7 to 8 of
Magickal first published in issues of Cross My Heart

Prince of the Mists

You'll Be Alright on the Day

FANTAZINE 1 (1988, Nut Hatch Collective; oop)
And Lovers, Long Ago by Jane
Rites of Passage by Jane
Twilight by Jane

FANTAZINE 6 (1995, Nut Hatch Collective; oop)
In the Seasons of War by Jane

LEATHER AND BLUE JEANS (1993, PAL Press; available from Denetia Arellanes
& Agent with Style)
Nothing Left to Lose by Jane

OTHER TIMES AND PLACES III (1992, OTP Press; available from Kathleen Resch
& Waveney Zine Shop)
Strangers on the Shore by Jane


Letterzines - only Jane's stories listed. Many of the stories in the out-of-print letterzines are now in Proslib.

THE HATSTAND EXPRESS 11 (oop)
Confessions of a Shutterbug by Jane

THE HATSTAND EXPRESS 15 (oop)
Another Bedtime Story by Jane

THE HATSTAND EXPRESS 17 (oop)
Wind in the Willows by Jane


Jane's stories inspired by Pros actors in other roles

ZAX/GALEN universe
1) MASTER OF THE REVELS by HG (zine novel)
Master of the Revels: An Alternative Prologue by HG
2) Bringer of Light and Magic by Jane (Proslib)

NOTE: There is ongoing debate about whether or not Jane of Australia and Kathy Keegan are two pseudonyms for one and the same person or whether they are two separate people who shared similar styles, especially after years of frequent collaboration in writing and in zine publishing. Jane has strongly implied multiple times (in print interviews and in zine editorials) that she and Kathy
are separate people. The Nut Hatch zines routinely referred to them as two separate people. Definitive statements on this issue are harder to find, and the potential wiggle room in some answers has fueled rumors and speculation. While there are certainly people who would know for sure, having known Jane and/or Kathy Keegan in person, I've not seen anyone absolutely confirm or
deny the rumors. Personally, I consider it an open question at this point.

Affairs of the Heart - Omnibus Edition by Kathy Keegan (*No earlier than 1995,
Nut Hatch Collective; oop): gathers together all 4 stories (Affairs of the
Heart, Little White Lies, A Question of Priorities, Survival Run)

CROSS MY HEART 3 (1988, Nut Hatch Collective; oop)
The Importance of Being Raymond by Kathy Keegan

WHAT IF... (1992, Manacles Press; oop)
Terms of Endearment by Kathy Keegan

6) LIFE GOES ON: GENTLE ON MY MIND, CHAPTER 6 by Joana Dey (Proslib)


Kathy Keegan's stories inspired by Pros actors in other roles

NOTE: Reference to cover art on title page, but no cover art on Jan 1992 edition that I have - Does NOT appear to have been removed, rather this edition published without cover art

Cupid Was a Housewife?

Out of the Blue

A Pretty Pair of Almond Eyes

A Question of Trust